Happy Friday, everyone! Today I want to share with you a totally lovely wedding suite that I completed for a couple in Florida a few weeks ago. When Brianna and her fiancee Matt first began talking to me about wedding invitations they explained that they wanted to create a design that would be well suited to both of their personalities. Brianna described herself as a “vintage, romantic girl” and her fiancee, Matt, as “a guy who’s just all about the ocean”. Matt has been a surfer all of his life and while Brianna and Matt weren’t incorporating anything obviously ocean-y into their wedding, like seashells or sand, they still wanted something for their invitations that was somewhat ocean-inspired, be it through colors, textures or design elements. This created a really fun challenge for me, as a designer, and you can see the results of what we came up with at the top of this post!

Brianna & Matt’s invitation suite included a 5.5″ square invitation, a 4bar size reply card and corresponding envelopes for both. Here are the invitation and invitation envelope:

Both Brianna & Matt’s invitation and reply card were printed on Crane Lettra 100% cotton Duplex paper in Ecru. The Lettra Duplex paper is twice as thick as the standard Crane Lettra which made these cards super-plush and substantial. Both of the envelopes were Khaki colored, printed with navy blue ink and came from Waste Not Paper Company. Here is an image of the invitation by itself:

When I was trying to come up with designs for Brianna and Matt, I tried to think of how I could incorporate both vintage and ocean-inspired elements into the design without the invitations seeming too much like a vintage postcard for a beach vacation. We wanted these to be really elegant. One of my favorite things to do when coming up with a design is to try out several different typefaces. For these invitations I ended up using a classic wood-type inspired face for the couple’s names and a more romantic script font for the rest of the text. The “and” that you see in between their names is also vintage-letterpress inspired. In order to come up with the “wave” pattern for the background, I began thinking about some of the cool imagery that I saw in Japan when I was there last November. The Japanese have an incredible and beautiful history of depicting waves and water in several different mediums and historical artworks from woodblock prints to calligraphic images. The final wave image that I used for the background on Brianna and Matt’s invitation was inspired by a classic, historical, Japanese depiction of a wave and I think that it worked out perfectly. The background image was letterpress printed in a very light blue ink and the text was letterpress printed over the top of it in navy ink. Here is a close-up so you can see the ink colors, impression, fonts and details a little more closely:

For the address on the envelope, I used the same navy ink and tried to keep the design similar to the type style that I used for the invitation. Here is how it turned out:

Brianna came up with the wording for her invitation and reply card herself, which I think is awesome, because it really lets the personality of the couple shine through. As you can see in the above photo, I incorporated the same wave image into the background for the reply card and utilized the same typefaces for the wording. Isn’t it pretty?!?
Brianna and Matt were absolutely fabulous clients to work with and I know that their Florida wedding this November is going to be fabulous! Brianna even sent me the sweetest e-mail shortly after receiving her invites. She wrote:

“They [The Invitations] are completely and utterly perfect; I have to confess that I must have spent a good 15 minutes just sitting there looking at them! You know you’ve done something special when even a couple groomsmen (and not any of them design-oriented in the least) have all said that they are the “sickest” invitations they’ve ever seen. I promise that’s a huge compliment!

You’ve been absolutely wonderful every step of the way and I’ve already recommended you to several friends. I honestly can’t thank you enough for helping to make this once in a lifetime event even more special for us. 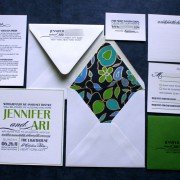 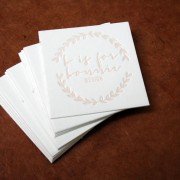 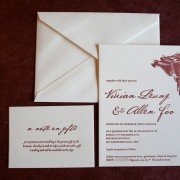 Custom Business Cards | B is for Bonnie Design
1 reply