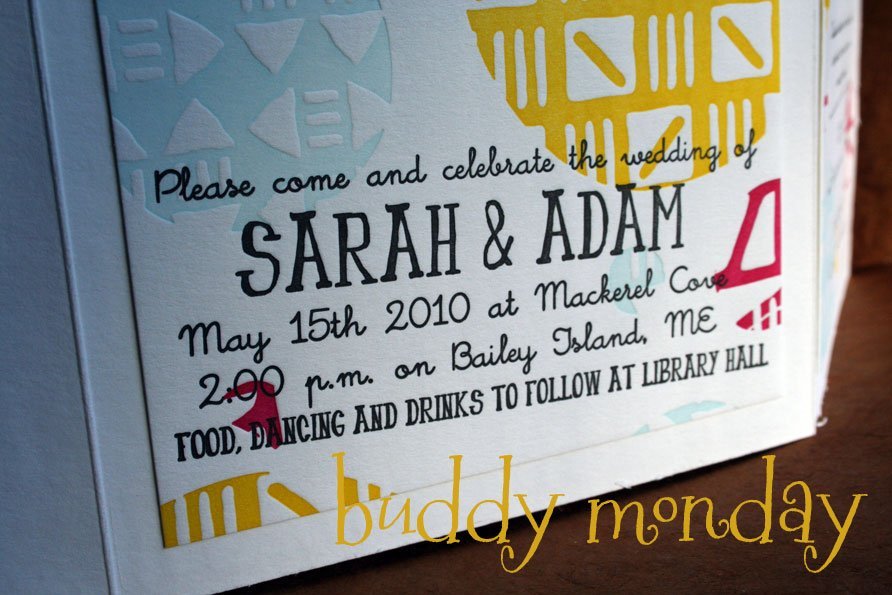 Three years ago one of my awesome former Eugene (now Portland, Maine) friends, Sarah Lomba DeGrandis, did a weekly feature on her blog, S. Jane Craft, called “Buddy Monday”.  Sarah’s an artist and crafter, and as such, has a lot of awesome friends, family and other people in her life that are creatively inclined, and she used the weekly feature to show off their work.  It was cool.

About a year ago I asked Sarah if I could steal her weekly feature idea and she (being the awesome person that she is) totally didn’t mind.  I wanted to change it up a bit though.  Rather than featuring work by awesome friends that I know weekly (although that would be cool too), I wanted to feature awesome work that Twin Ravens Press has done for our friends.  You see, we work on lots and lots of wedding and business stationery every year…and it doesn’t all end up on the blog.  I wish it all could, but since I’d rather spend more of my time working with fine folks like you and actually letterpress printing, sometimes the blog gets put on the back burner.  I realized though that over the last five years, I’ve gotten to design some really kick-ass stationery for friends, and most of it hasn’t been shown on this blog.  So, this new weekly feature is going to hopefully be a way for me showcase awesome stationery that I’ve created for awesome people in my life, even though some of it was created 4-5 years ago.  I hope you enjoy it!  Check back tomorrow for our first ever “Buddy Monday”.