Earlier this summer we created a totally charming set of Bar Mitzvah invitations for a kid named Ethan, and his family, here in Eugene.  Ethan’s Bar Mitzvah (or Jewish coming-of-age ceremony) was to be held in early August at the local temple, with a separate celebration at the family’s home to follow in the evening.  When Ethan and his mom, Jocelyn, came to visit me, we talked about what kind of theme or imagery Ethan wanted for his invitations and party.  He told me all about how he was really into The Lord of the Rings and fantasy stories in general, and wanted his Bar Mitzvah invitations to reflect that.  Now, this got my wheels turning quite a bit, and for a while, Jocelyn, Ethan and I planned to come up with Bar Mitzvah invitation wording that was similar to the start of the first chapter of The Lord of the Rings.  You know, “When Mr. Bilbo Baggins of Bag End announced that he would shortly be celebrating his eleventy-first birthday with a party of special magnificence, there was much talk and excitement in Hobbiton…”, but instead of it being the literal text from the novel, we would alter it to have Ethan’s name and have the “party of special magnificence” be the Bar Mitzvah celebration.  Well, we worked on that for a while, but since we were on a pretty short timeline for this project, we didn’t get the fancy wording all figured out.  We still kept with the theme and style for the design though, and the invitations turned out totally awesome!

Ethan’s invitations were one piece of paper, but included both the actual invite and a perforated reply post card for guests to mail back.  In order to do this we printed the invitation and reply card together and then added a perforation right above the reply card part of the design so that guests could fold and detach just the reply card.  These invitations were mailed in bright, shimmery, copper envelope that you can see in the photo above, and had the family’s return address printed in black ink on the flap.

To really play up the Lord of the Rings/fantasy novel feel of the invitations, we chose some really decorative, old-fashioned fonts for all of the text.  Ethan’s name was the most prominent text element of the invitation, so I made sure to find a script that was super-decorative.  Lettering this fancy isn’t for every design, but I absolutely love when it works out – the way it letterpress prints is just so cool!  The other two fonts we used also had an old-fashioned, celtic feeling to them, which I think also tied in with the design really really well.

The other totally awesome design element from these invitations is the celtic knot, medieval manuscript-inspired dragon.   The dragon was printed in chocolate brown and green inks and I think it added the perfect, whimsical touch to these invitations!  For the text, we printed Ethan’s name and the little round, decorative element in the middle of the design in copper ink and all of the rest in chocolate brown.

For the reply card portion of the invite, we used a fancy copper border to decorate the card and a copper “M” in the same font as Ethan’s name for guests to write in their names.  The rest of the text of the reply card was printed in chocolate brown ink and included places for guests to indicate whether they were attending the luncheon, party or both.  The back of the reply postcard (which you can see in the bottom right photo below) was simply printed with the family’s return address in brown ink.  The photo on the bottom left below shows the same address printing on the back of their invitation envelopes.

Aren’t these just too cool?!?  I had so much fun working with Ethan and his mom, Jocelyn, this summer on these Bar Mitzvah invitations!  It’s so much fun when a family comes to me with an original idea or theme and we can just run with it!  Thanks so much Ethan, Ed, Jocelyn and Claudia!  You rock! 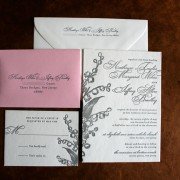 Save the Date | Erin & Adam are Getting Married! 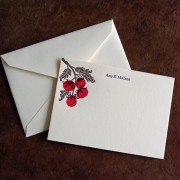 Save the Date | Sarah & Geordie are Getting Married!

Save the Date | Lauren & Warren are Getting Married!

Jazz up your cocktail hour with a cute set of cust

Hey Eugene! Today is our first day vending at the

It’s not very often that I get jobs requiring ha

These save-the-dates that I printed this past week

This was another one of my favorite wedding suites