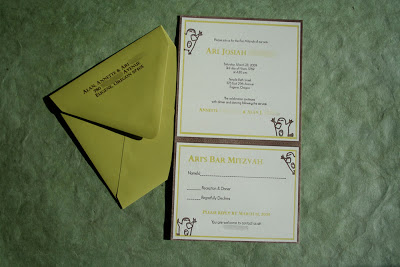 I must begin by saying that this post is long overdue, however, I would much rather be overly-late in showing off cool things, than not show them off at all.  Remember how I mentioned a while back in this post that I enjoy designing and printing stationery for a variety of other events, as well as weddings, and that I hadn’t had many opportunities to design and print for Bar & Bat Mitzvah’s but really enjoyed doing it when I did?  Well, even though I finished this set of stationery back in February, I thought it would be great to show you, because it is Twin Ravens Press’ second Bar/Bat Mitzvah invitation set!  This set included an invitation, reply postcard, an invitation envelope, program covers and some really cool, die-cut favor envelopes.  You can see the full invitation/reply card and invite envelope at the top of this post.

Like our first Bat Mitzvah invitation, the Bar Mitzvah, Ari, and his mom, Annette, decided to go with a combination invite/reply card that was printed on a single sheet of paper, separated by a perforation so that the reply postcard could be torn off and mailed back.  This is a really cool option, in my opinion, to do with an invite and reply set because it keeps everything together in one place for the invitee.  Ari’s invitations were a 5.5″ square size, printed on Crane Lettra 100% cotton Ecru paper, printed in two ink colors: chartreuse and chocolate brown.  They came with a coordinating chartreuse envelope from Waste Not Paper Company that had the family’s return address letterpress printed on the back flap.  Here is a close-up of the top, invitation portion of the invite/reply card set: 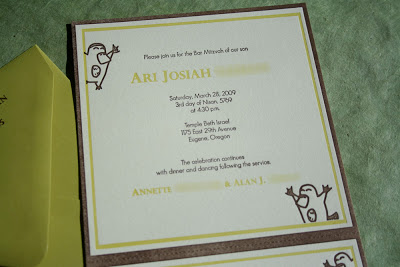 If you click on the above photo to enlarge it you can see the two fonts we used for the different verbiage on the invite.  I think the combination of the classic serif font for the names and the more modern, san-serif font for the other wording looked really nice together.  When I asked Ari what he wanted on his invites, he asked if he could have a platypus.  Now, I get asked to draw/design a wide variety of things for invitations, but this was the first time I have ever been asked to do anything with a platypus.  As much as I would love to take credit for those awesome and cute little guys that adorn Ari’s invitation and other pieces, I can’t.  Ari, the Bar Mitzvah, drew them himself!  I think they are awesome and totally unique!  I mean, really, how many times are you going to see a letterpress printed partying platypus, wearing a kippah, on a invitation?  They are really just too cool…
Here is the reply card section: 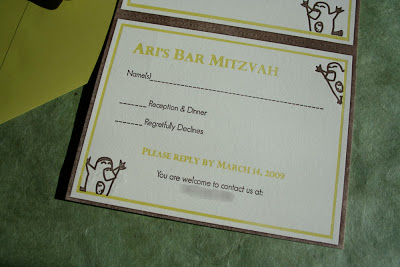 As I mentioned above, the reply card for this set is a postcard style and was part of a perforated combination card with the invite.  It was printed in the same colors as the invite and feature Ari’s awesome platypus as well.  Because it was a postcard, it was printed double-sided with the reply portion on one side (above) and the address it was going back to on the other side.  Here is the back (address) side of the same card: 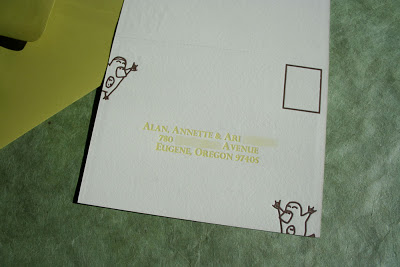 Isn’t it cool?!?  This wasn’t all though!  For the actual ceremony and party afterwords I also got to design a couple of different pieces: a program cover and some favor envelopes. 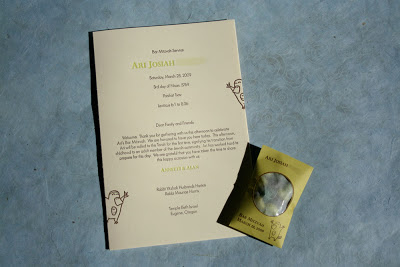 The first piece for the actual ceremony was a letterpress printed program cover, in the same style, using the same fonts and platypus from the invites. 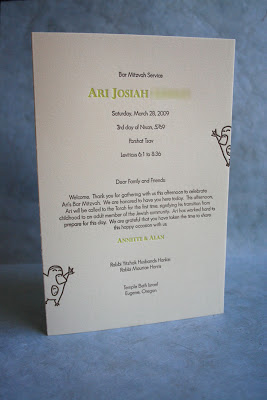 This program cover was slightly larger than 5.5″x8.5″ and was folded, so that it could hold a standard 8.5″x11″ sheet that had been printed and folded in half.  Here is a close-up of the front of the program cover, so you can see the letterpress impression and the nice fonts: 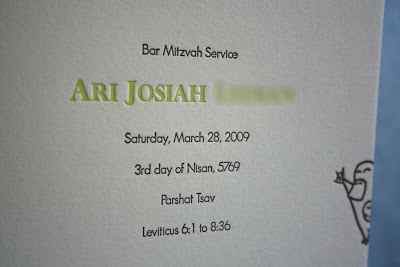 The other piece I created for the actual day of the ceremony was Annette’s idea and was something that I had never done anything similar to before.  Annette had been reading Martha Stewart Weddings online and had come across this page, showing off some really cool paper envelope packets that had a window cut out of them for jelly beans.  Ari really likes jelly beans and Annette thought they would be the perfect favor for his party following the Bar Mitzvah, and I thought this was a really cool idea too!  Here is a photo of our finished packets (I’m pretty sure when Annette filled hers with jelly beans that she used a clear cello bag inside the envelope so that you could see the jelly belly’s a lot better – I didn’t have any clear bags that size when I went to take these photos, so I used a glassine envelope instead, but you get the idea): 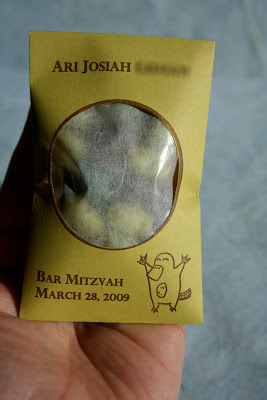 We designed the window, text and image for the front of the packets to coordinate with the other stationery pieces we had created.  When it came time to make these, I ordered some chartreuse coin envelopes from Waste Not Paper, the same company I had gotten the square invitation envelopes from, and letterpress printed the text and platypus image on the front.  Then I used the letterpress to die-cut a 2″ circle shape in the center of the envelope.  Annette then inserted slightly smaller cello bags into the envelopes and filled them with coordinating green, chartreuse and brown jelly beans.  Here’s another photo with the jelly belly’s: 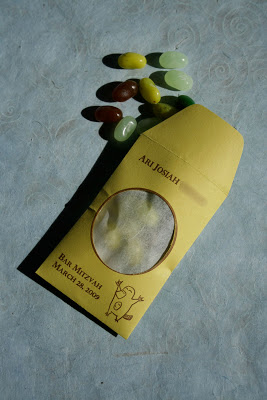 I think this was a really cool idea for a Bar Mitzvah (or really any type of party favor).  If you want to make something like this for your upcoming event, Martha has a really nice little tutorial about it here.  Martha’s aren’t letterpress printed, but you can get a similar effect using a rubber stamp and one of those small shape punches you can buy at a craft store (it will just take you a lot longer).  What a cool idea though!
I’ve heard from Annette and Ari, since the event, and apparently, everything was a big hit!  If you are interested in more information about Twin Ravens Press’ custom design and letterpress printing for your child’s upcoming Bar or Bat Mitzvah or another event, please feel free to contact me at [email protected]!
Thanks Annette & Ari!
https://twinravenspress.com/wp-content/uploads/2015/05/NewRavensLogoForMatt.png 0 0 Kristin https://twinravenspress.com/wp-content/uploads/2015/05/NewRavensLogoForMatt.png Kristin2009-04-29 11:01:002015-04-03 02:05:39Partying Platypus: Ari's Bar Mitzvah 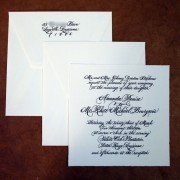 Beautiful Thank You Notes for a Beautiful Wedding 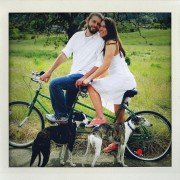 Save the Date | Alexandra & Ryan

Jazz up your cocktail hour with a cute set of cust

Hey Eugene! Today is our first day vending at the

It’s not very often that I get jobs requiring ha

These save-the-dates that I printed this past week

This was another one of my favorite wedding suites