You are here: Home / Blog / leaves 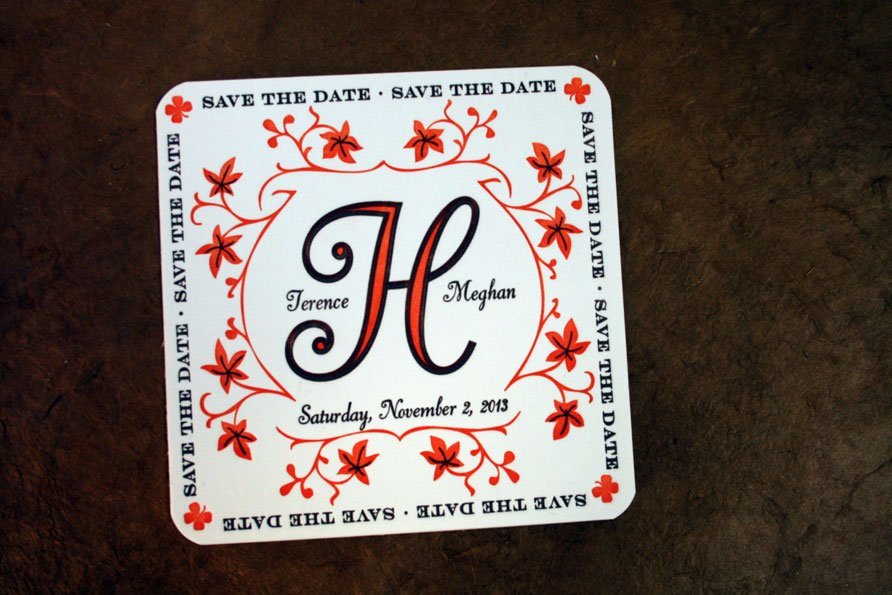 It’s hard to believe it, but fall is just around the corner, folks!  Check out these gorgeous fall-themed Save-the-Date coasters that we printed for Meghan and Terrance this past spring!  They were designed by the father-of-the-bride, and printed by us in two ink colors: orange and chocolate brown on premium, duplex Holyoke 100% cotton rag paper.  I love the fancy leaf border on these!  They’re so classy!  Each save-the-date coaster was paired with a matching cream-colored envelope. 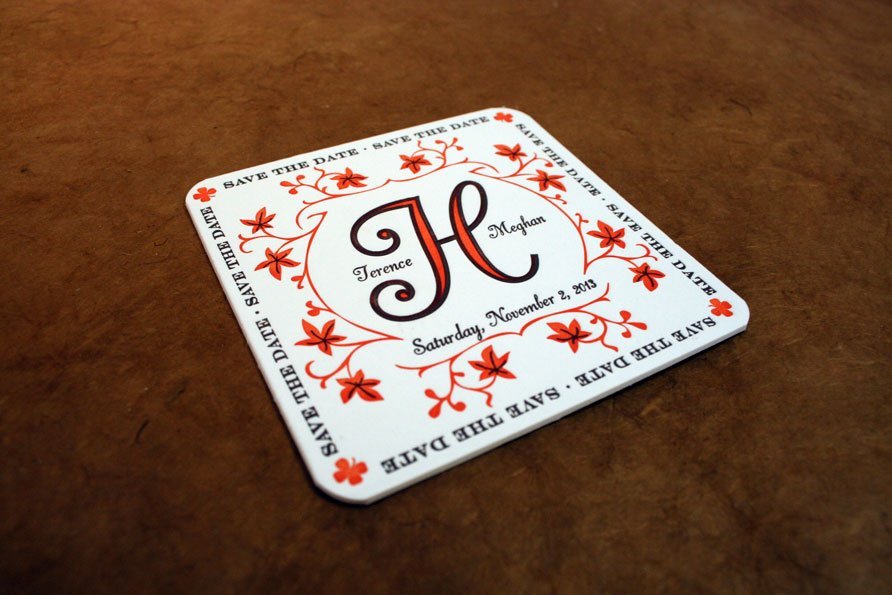 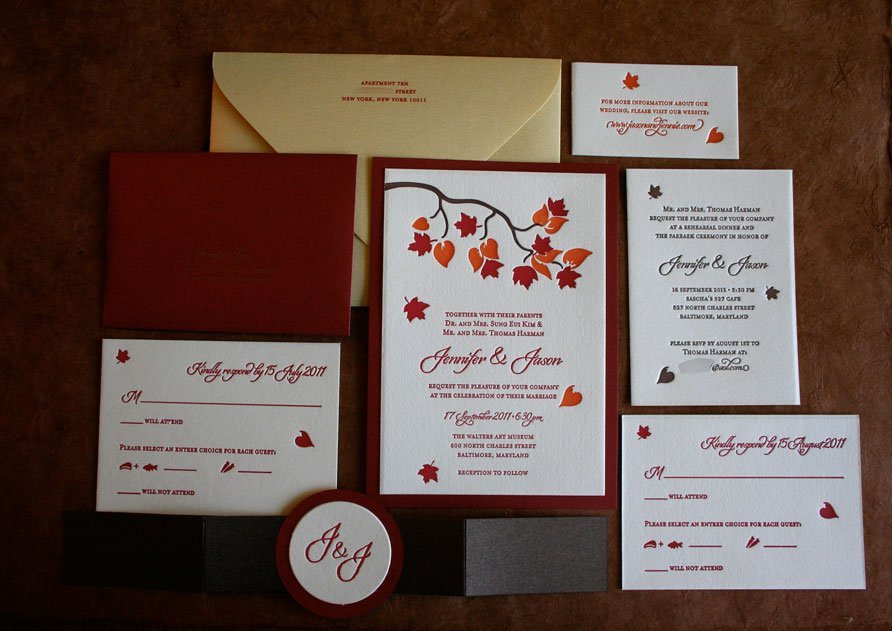 The set of wedding invitations I have to show you today are pretty special for me and for Twin Ravens Press.  I’ll get to why in a second, but, in order to understand why this job means so much to me, you need a little back-story first.  A year ago today, I was working with an intern in the printshop and I smashed my hand in our platen press and broke it.  Not only was this accident terrifying on principle, but at the time, there wasn’t really any certainty as to whether or not I would fully recover, and I had no way to know how this would affect my ability to continue my career as a letterpress printer.  I’m happy to say that, a year later today, I’m fully healed and entirely capable of creating beautiful letterpress invitations with no loss of dexterity.  I was really lucky.  So, what does this have to do with the beautiful set of wedding invitations you see above?  Well, a couple of days prior to my accident, a year ago, Jennie and Jason signed a contract with us and put down a deposit to have me design and print their wedding invitations.  When I broke my hand, it was going to be at least six-ish months before I could work again and I wasn’t sure that I would be able to do this job. As I’ve always said, if something is meant to be, it finds a way of working itself out.  This job certainly did…

Up until last March, I was basically running Twin Ravens almost entirely by myself.  I had occasional help now and then from interns and very-part-time employees, but there wasn’t a whole lot of consistency in terms of that.  When I broke my hand, I called up a now-very-close friend, Darcy Jeffs, and asked if she wanted to work here, part-time, until I was able to print again.  Luckily for me, she said yes!  Darcy is a graphic designer herself and worked in both Holland and New York City prior to moving to Oregon.  She now lives in a century-old schoolhouse on the Oregon Coast with her fiance and three adorable cats.  She’s also the proprietress of Neue School Press, and one of my very best friends.  Darcy took over this job with gusto, and designed the gorgeous suite for Jennie and Jason that you see above.  After the designs were complete, we printed and assembled these together, here at Twin Ravens. 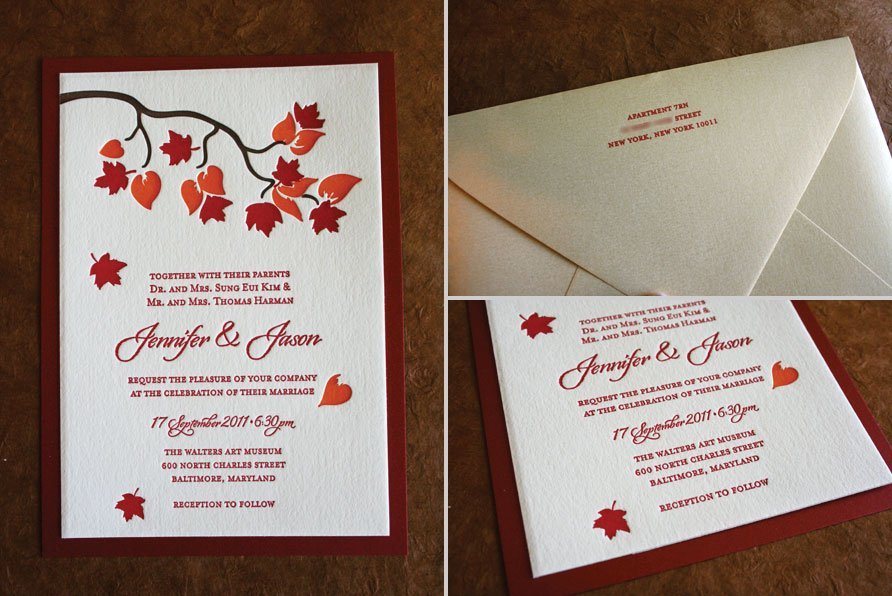 Jennie and Jason’s wedding invitation was an A7 size that was printed in three ink colors (orange, red and chocolate brown) on lovely, 140 lb. Holyoke Natural 100% cotton paper.  Each invitation was matted on a shimmery deep red card stock to create a border.  Darcy created the gorgeous fall leaves and branch imagery that you see on each of the pieces.  We paired the invite with gold A7 envelopes from Waste Not Paper Company and letterpress printed Jennie and Jason’s return address in red ink on the flap.

Didn’t the graphics and letterpress printing just turn out so beautifully!?!  Darcy did an amazing job taking on a project that I was (quite literally) unable to handle last year, and the invitations turned out absolutely gorgeous!  The fall theme that she and Jennie came up with was perfect for Jennie and Jason’s September wedding at The Walters Art Museum in Baltimore. 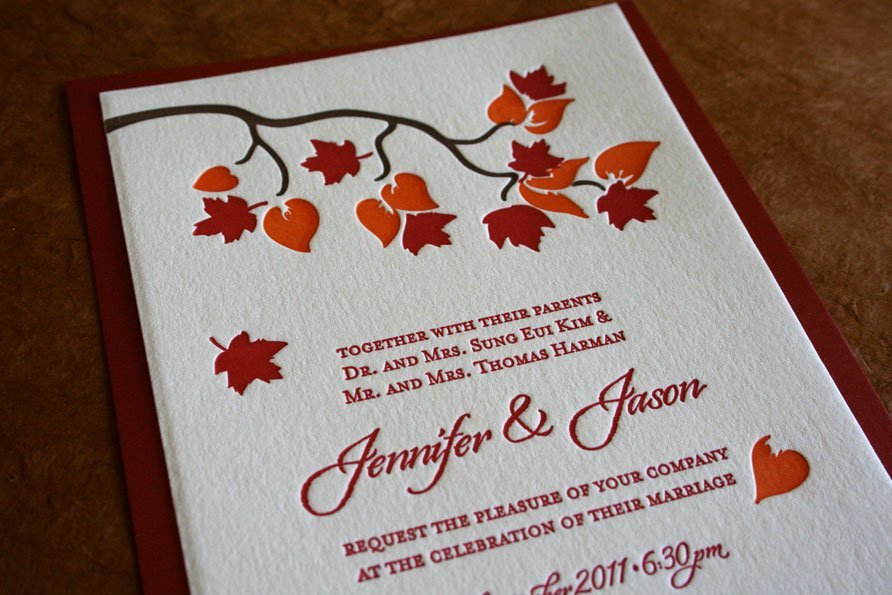 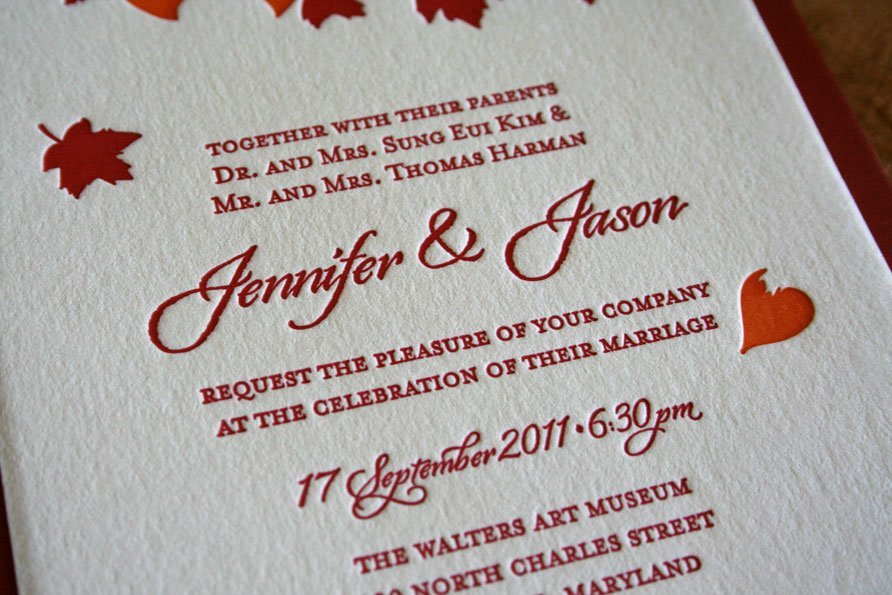 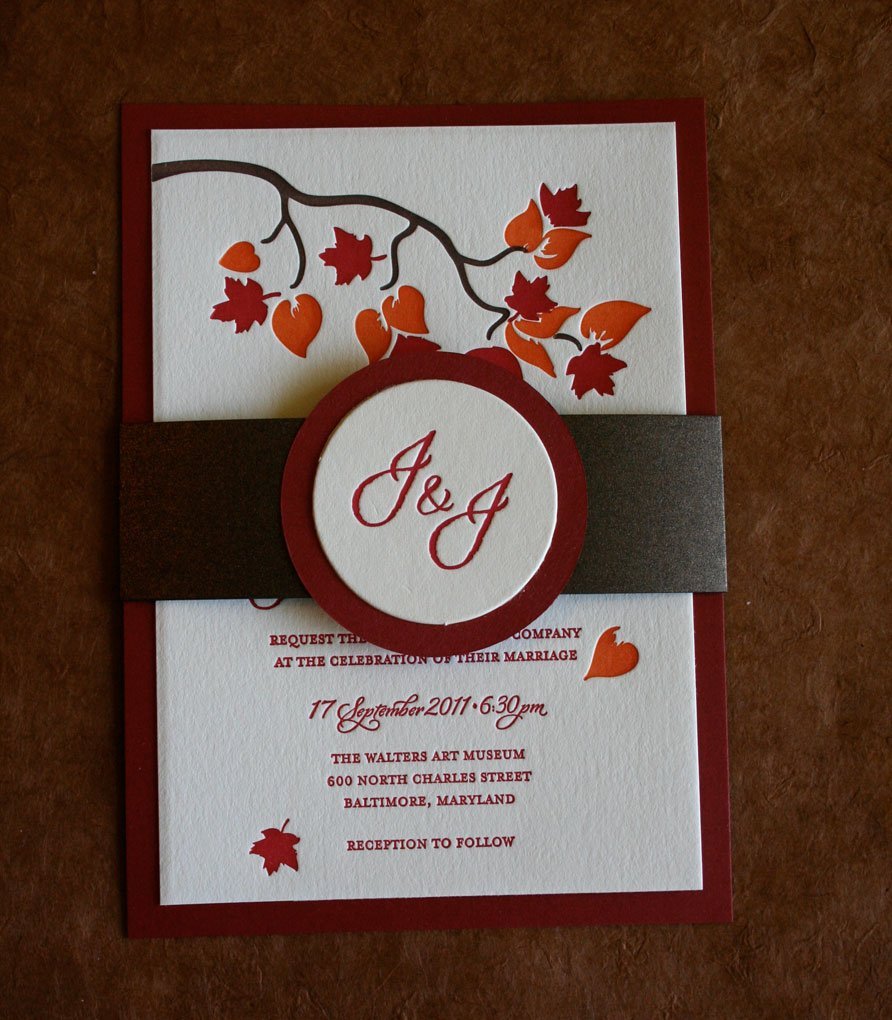 Above, you can see what the invite looked like with the belly band.  Jennie and Jason’s belly band was composed of a circular medallion that was made out of the same Holyoke paper they used for their invitation, and was printed with their initials in red ink.  The printed medallion was then matted onto a slightly larger medallion made out of the same shimmery red paper we used for their invitation matt.  Then, the actual band, was made out of a shimmery bronze (similar to chocolate brown) paper.  It was scored in two places and fastened in the back of the invitation with a clear round seal. 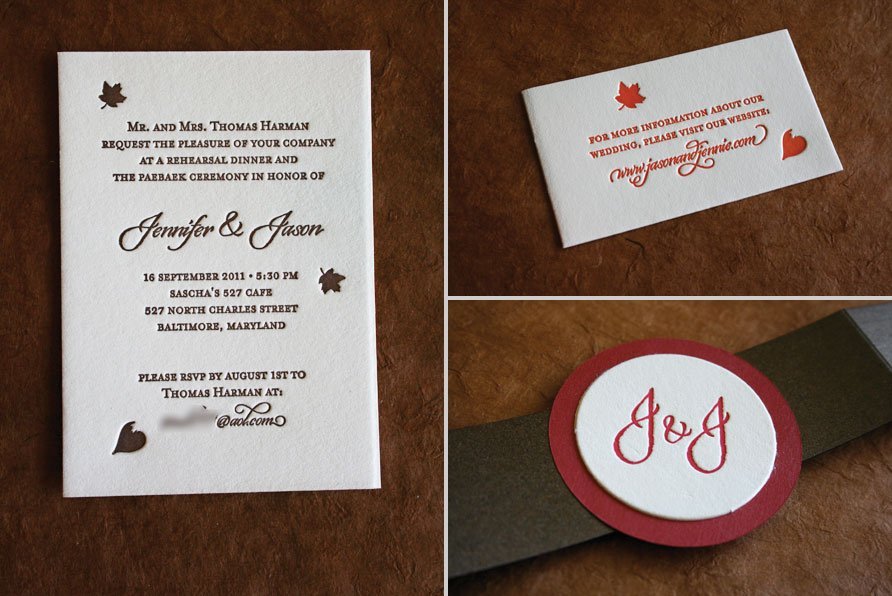 Above you can see two of Jennie and Jason’s inserts!  The one on the left was their invitation to their Paebaek ceremony.  A Paebaek ceremony is a traditional Korean celebration held at weddings.  If you’re interested in what this is, you can read more about it here.  The Paebaek ceremony invitation was a 4bar size and was printed in chocolate brown ink.  On the top right, above, you can see Jennie and Jason’s website insert.  The website card was the same size as a standard business card and was printed in the same orange ink that we used on their wedding invitation.

Below, Jennie and Jason had two different reply cards, one with a July RSVP date and one with an August date.  Sending out two rounds of invitations is a great way to limit the number of attendees to a certain head count, particularly if you have a large guest list.  Both reply cards were printed in red ink and featured a place where guests could indicate what type of entree they wanted at the reception.  Each reply card was paired with a shimmery red envelope that had Jennie & Jason’s address letterpress printed on the front in gold ink. 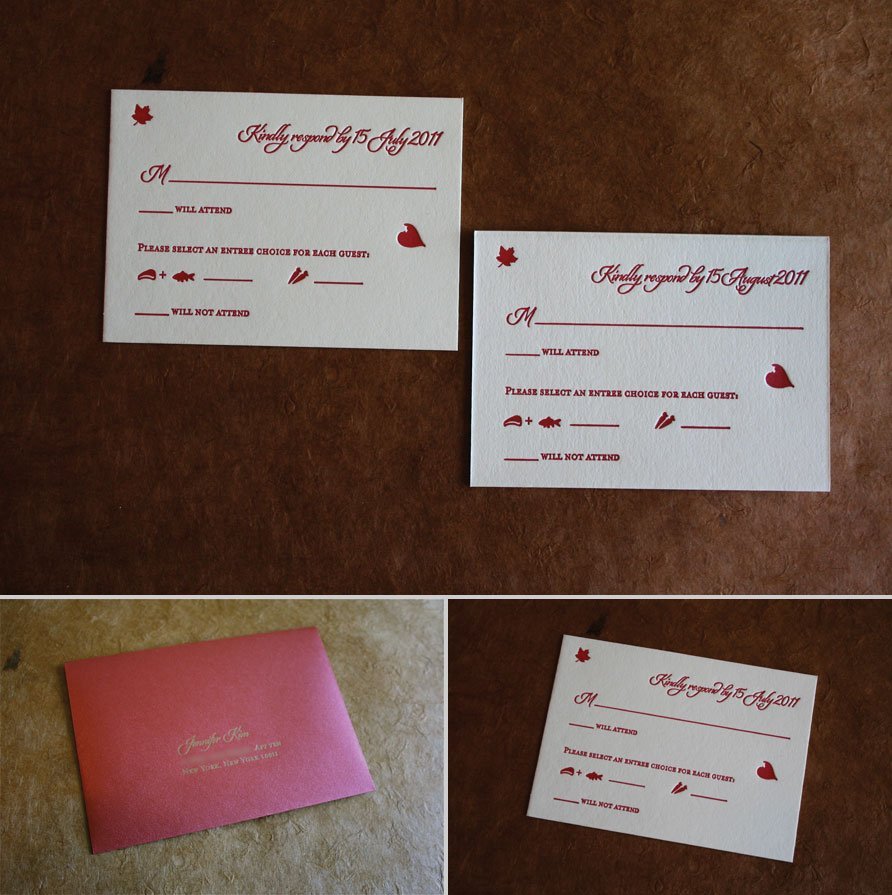 Jennie was so sweet and patient to work with throughout this whole process, especially considering that my prognosis was so unknown.  I loved working with both her and Darcy on these and I think the final product couldn’t have turned out more beautiful! 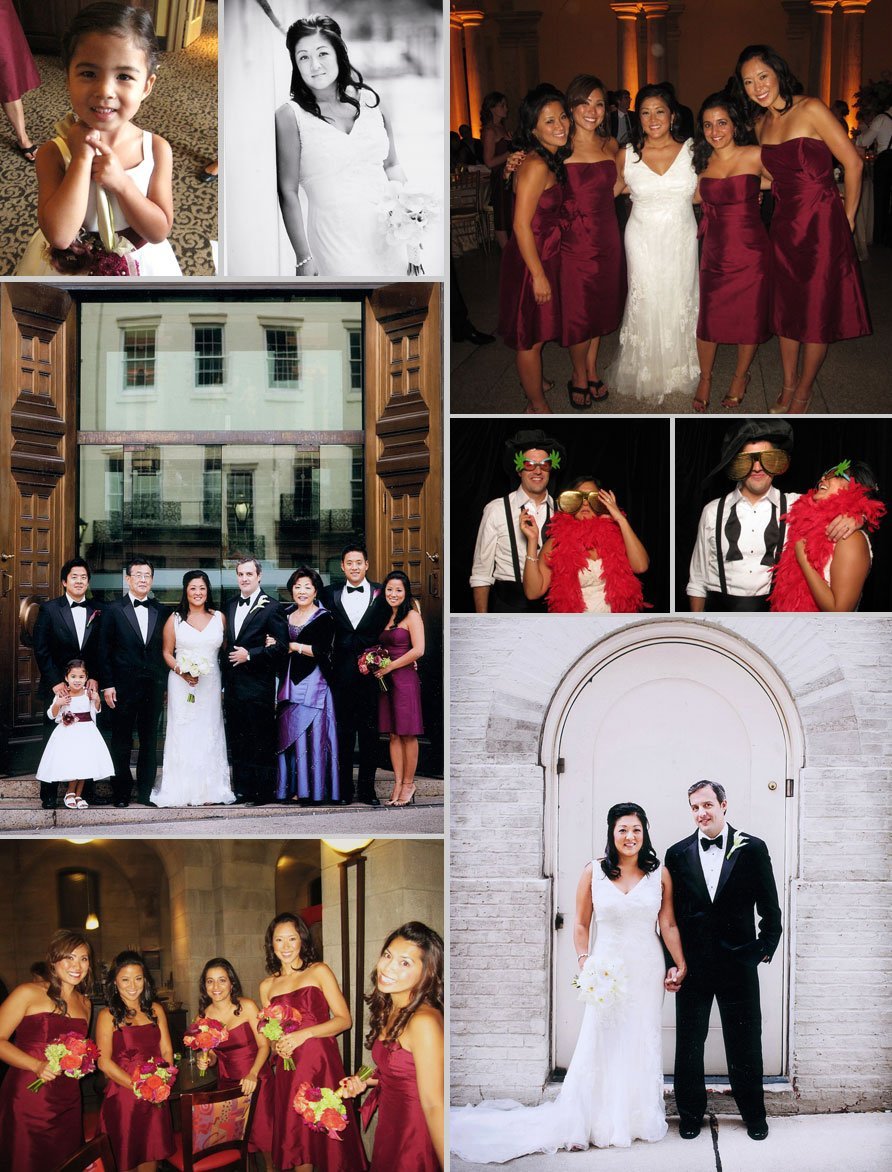 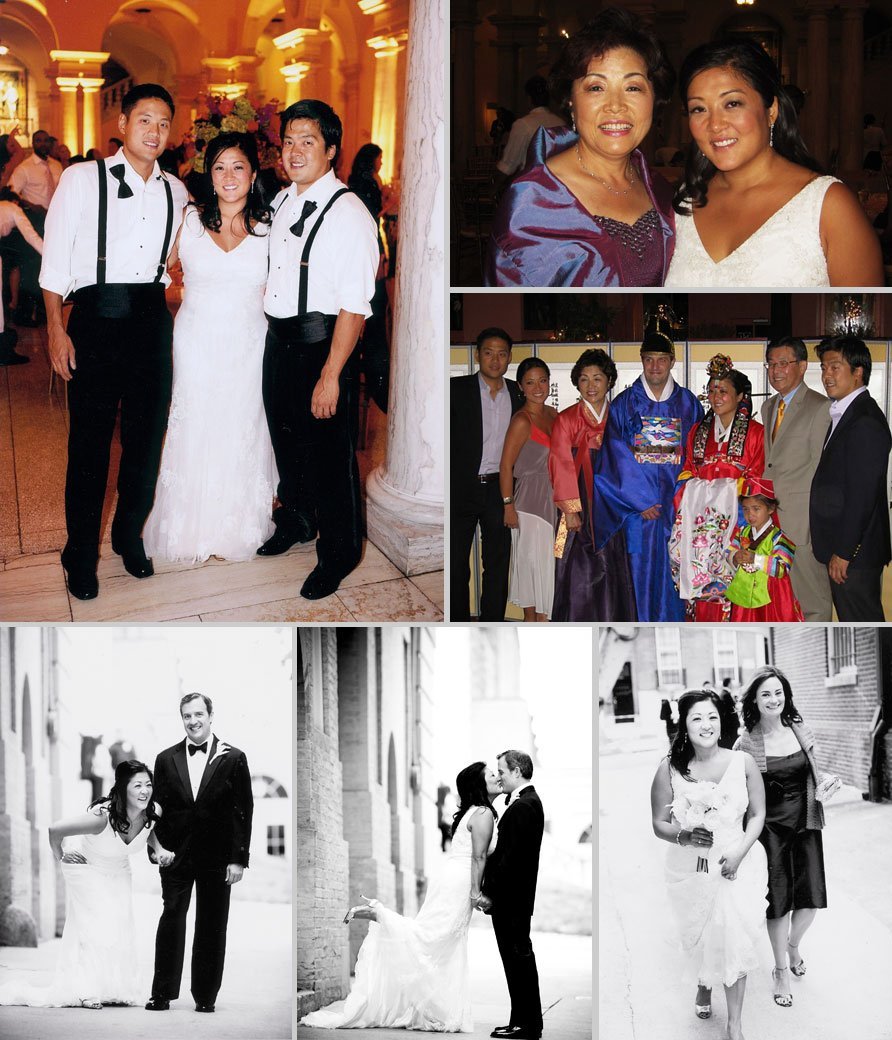 Aren’t they just a lovely couple!?!  Jennie & Jason, thank you so much, for continuing to work with us in spite of my accident!  I’m so happy that we got to do these, and it looks like your big day was absolutely gorgeous!  Thanks again!

Today, I facilitated an event where nearly 100 peo

Check out this super sweet image of the custom bab

She’s in the building! Remember how I mentioned

While we’re talking fun Valentines events and be

This error message is only visible to WordPress admins