Hello all!  I know I’ve been posting a lot of stuff about Etsy and holiday cards lately and not a lot about custom work, so I thought I would take a break from showing off all of the cool stuff you should go out and buy for the holidays to write about a recent custom job.  Remember how I said a while back that I somewhat hastily completed not one, but three custom jobs and got them sent off to their respective clients right before leaving the country for two weeks to go to Japan? Well, I wrote about the first two of those custom wedding stationary jobs here and here, and this my friends, is the third one.  I saved the post about this job for last, partly because I had a lot more to write about it than the other two, partly because the first round of pictures I took of this stationary didn’t really do it justice and I wanted to take more, and partly because I was struggling with the tiny imp inside me who never *really* wants to write about politics in conjunction with my work, but sometimes just can’t resist anyways.  Remember this post about the Obama cards and voting that I put upright before the election? Yeah, like I said, sometimes it just comes out.

Several months ago, long before the election and Japan and other stuff that’s been going on here lately, I was contacted by a wonderful (and rather talented!) lady named Valerie about creating a wedding set especially for her and her fiancee.  I get contacted fairly frequently about creating custom wedding sets, so initially this job wasn’t all that different from the many others that I’ve written about here.  You see, what makes this job somewhat unique other than the stationary designs themselves (and what gives me political-imp amo) is that Valerie’s love of her life is also a lady.  So, here we go, political rant first, then pictures of pretty stationary.  (If you would rather skip this part because you’re not in the mood for a political rant, or you’re like “Yes, Kristin, we know, you’re preaching to the choir”, feel free to skip the rest of this paragraph and the next one.  After that, I promise, I’ll be talking about the actual stationary).
Unless you’re reading this from outside of the U.S., or you’ve been living in a cave for the last few years, you’re probably aware of the fact that the U.S. has some pretty unfair and inconsistent laws regarding marriage.  On the whole, marrying someone who is your same-sex in the United States is either banned in most States or recognized as a union, but not recognized as “marriage” in others.  Whether or not individual states allow or recognize same-sex marriages or unions is still a major issue in contemporary politics and elections and is one of the main issues that divides people in this country politically.   The most recent display of this kind of political injustice was this November’s passing of Proposition 8 by the state of California which banned same-sex marriages in the state despite a Supreme Court ruling on May 15th of this year that stated “the right to marry in California extends equally to all, gay and straight alike…”.  Personally, I find California’s contradictory behavior on this issue as well as the majority of the country’s lack of acceptance a little appalling.  Personally I think you should be able to marry whomever you want because you’re in love with them and want to spend your life with them, regardless of who they are or what gender they happen to be.  I feel much the same way about same-sex marriage as I do about the abortion issue: simply put, if you don’t agree with same-sex marriage (or abortion), then don’t have one.  That doesn’t give you the right, however to tell others they can’t if the decision is right for them.  I think in general marriage is a wonderful gesture, but the fact that it isn’t extended equally to everyone in this country is pretty sad.  Valerie wrote about these issues briefly in correlation with why she and Rebecca chose to get married on her website far more eloquently than I ever could.  She writes:

“There are a lot of things about marriage that we don’t like, particularly the way marriage excludes some couples and elevates the state of coupledom above all other relationships, but we knew that we wanted to make this commitment to each other, before our friends and family. It is not the right choice for everyone, but it is for us. That’s why we’re recreating marriage for ourselves. Not to say we’re better than other couples because we threw a big party, but because we’re leaping off a cliff together and we want the other people we love (because we also don’t want to cut off all ties from everyone else just because we’re getting married) to be there to catch us.”

I think for the majority of people out there, gay or straight, this is what marriage is about or what it should be about.  I don’t believe that one couple is “better” or more “real” than another because of the gender or genders of the people in it and because of this and the fact that they are a wonderful couple to begin with, I was delighted to work with Valerie and Rebecca on their wedding stationary.

One of my favorite things about working with any couple on their wedding stationary is that you really get to learn about who the couple is – both as individuals and as a unit.  Valerie is a poet and creative writer receiving her MFA from Florida State University and she and Rebecca fell in love at a music festival under an oak tree in Michigan.  They’re favorite colors are orange and green. They wanted to incorporate some of these aspects of their personalities and their story into their wedding stationary – which makes the creative designer part of my job really fun.  We came up with several different designs incorporating botanical elements, oak-themed elements, poetry and literary elements into the designs and this is the one V&R decided on:

Above you can see a picture of the whole stationary suite.  It included an A7 size invitation, A2 size reception card, a 4bar reply card, 2 sets of invitation envelopes, folded 4bar thank you cards and thank you card envelopes.  All of their stationary was printed with three colors: chocolate brown, light green and orange and the four main pieces all feature an oak tree with scattered oak leaves, referencing the place V&R first fell in love.  To incorporate a bit of the literary element into this we chose Garamond as the main font for the stationary, which is the same font Valerie uses for all of her poetry.  We then chose a more whimsical, contemporary font printed in orange for select elements on all of the pieces, like names and dates, etc.  The second photo above is of the invitation itself with the two different envelope colors.  Both of these are outer envelopes that were lined with a white paper – we ended up doing half of one color and half of the other rather than doing an inner and outer envelope.    Below is a close up of part of the invitation so you can see the small details on all of the oak leaves and the different fonts:

The reception card and reply card had a similar layout to the invite and featured the same elements for continuity, but were different sizes.  You can see pictures of these two cards separately below as well as the invite, reception and reply cards all stacked up together.  Notice on the reply card that the format is fairly different from others that I’ve done.  V&R are having their guests RSVP on their website rather than sending the card back because they’re moving in between when they mail out their invites and the actual wedding.  This is a great idea, in my opinion, for couples who are in a similar situation (yay for modern technology!).

The last part of Valerie and Rebecca’s suite was an oak tree thank you card with a coordinating green envelope for after the ceremony.  Check it out here:

I really love how this set of stationary turned out.  The design and colors were really fun, the couple was wonderful to work with an
d the printing turned out beautifully.  I especially love how all of the little elements in the stationary really reflect the story and personalities of Valerie and Rebecca.  Valerie was pretty excited about it too.  If you’d like to read what she had to say about the stationary and about working with me and Twin Ravens Press, you can read it on her blog here.  Congratulations Valerie & Rebecca!  You two are awesome!
https://twinravenspress.com/wp-content/uploads/2015/05/NewRavensLogoForMatt.png 0 0 Kristin https://twinravenspress.com/wp-content/uploads/2015/05/NewRavensLogoForMatt.png Kristin2008-12-15 14:54:002015-04-03 02:07:10Weddings | Valerie & Rebecca 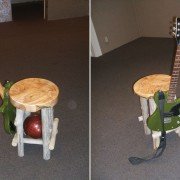 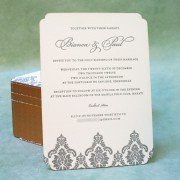 Save the Date | Kara & Steve are Getting Married!

Save the Date | Sherry & Thomas are Getting Married!