Ladies and gentlemen, meet Brianne.  Here she is holding a giant box of letterpress printed wedding invitations in pretty pink envelopes ready to go to the post office.  Isn’t she just adorable!?!  Brianne is one of our fabulous custom wedding clients from this spring and is getting married this upcoming July in Arroyo Grande, California.  If the above photo looks familiar, it may be because you recognize her from WeddingBee.com.  She’s Miss Turtle! If you’ve been following her posts there, you may have already seen and heard about these invitations, however, they’re just so pretty that you’re going to have to hear about them again from us.  Brianne actually designed her invitations herself (isn’t she awesome?!?) and hired Twin Ravens Press to do her letterpress printing.  She had us print for her an A7 size invitation, 4bar size reply card and two sets of coordinating envelopes.

Brianne’s wedding invitation suite was printed on 100% cotton Crane Lettra Pearl White paper.  She chose a duplex weight (really really thick) sheet for the invite and a standard 110 lb. sheet for the reply card.  Everything was printed in chocolate brown ink.  Here are some close-ups of the invitation:

I absolutely adore Brianne’s choice of fonts (Feel Script and Academy Engraved) and her totally awesome monogram at the top of the invitation!  It’s a very classic format with some very cool modern touches!  Love it!

One subtle, special detail of these invitations is that Brianne had us paint the edges metallic silver.  Edge-painting and gilding are centuries-old, decorative techniques where color is applied to just the edges of paper.  Edge-painting has a rich history in letterpress printing and bookbinding, with the earliest use of the technique dating back to the 10th century.  For centuries, master bookbinders gilded the edges of books with gold, to show their preciousness.  Today we can use edge-painting to give your invites an extra little bit of pizazz by highlighting an existing color in the printing or by introducing an all new color to the suite (like Brianne did).  Check it out:

I’m really excited to be offering this technique in our studio and I think it’s a really classy way to add a little something extra to a set of invitations or business cards!

Brianne also designed a matching 4bar-size reply card to go with her gorgeous invites, and we paired them with a light pink envelope from Waste Not Paper Company, also printed in chocolate brown ink.

The invitation envelope was also pink (as you saw above) and had Brianne’s parents’ address letterpress printed on the back flap, also in chocolate ink.

If you like the way these invitations turned out, you really ought to go and check out Brianne’s posts about them over on WeddingBee here, here and here.   After receiving the invitations from us, she added some more awesome embellishments herself, including envelope liners, a custom belly band with a wax seal, and some super-cool vintage stamps!  Brianne is super-creative and was really fun to work with on this project and I’m sure the rest of her wedding is going to be amazing.  Thanks so much Brianne and Brandon, you rock! 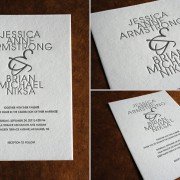 Save the Date | Christina & James are Getting Married!

Save the Date | Dana & Robert are getting married!

Donna Boucher Photography You Turn Me On.
Scroll to top