As I mentioned in an earlier post this week, we worked with three different couples earlier this summer who were married this past Labor Day weekend.  Kelly & Wai were one of those three couples and, boy, did we really enjoy getting to work with them!  Both the bride and groom were so excited about their wedding and about our work, that it made designing the set of stationery that you see above really, really exciting and fun.   Kelly and Wai had a pretty short timeline for these when they contacted me in late June, but they had such a clear vision of what they wanted out of their designs that it was pretty easy coming up with these for them!  Kelly & Wai’s invitation suite included an A7 size invite in one ink color (Aubergine) with blind embossing, a 4bar size reply card, also in one color with blind embossing and two sets of envelopes, one for the invitation and one for the reply card, both in a nice medium grey with aubergine ink.

Kelly & Wai were married in an outdoor ceremony in Newport, Rhode Island.  Their ceremony took place overlooking the ocean under an arbor and they new that they wanted the arbor image to be a focal point of the design of their invitation.  Kelly and Wai sent me some photos of what their arbor was going to look like and I drew the tiny arbor image at the top of this invite.  We also incorporated some subtle floral elements in the border of the invitation and continued the outdoor/garden wedding theme even more with the blind embossed honeycomb pattern that ran down the top left corner of the invitation.  Their invitation envelopes were a nice medium grey and also featured aubergine purple ink.  We wanted these envelopes to be decorative and reflective of the design of the pieces on the inside, so for these envelopes we used the honeycomb pattern again and also had a little bee flying up from the bottom of the flap of the envelope towards the couple’s return address.  Isn’t that cute?!?

The design for Kelly and Wai’s reply card was similar to the design for their invitation.  We used the same floral border and honeycomb embossing – this time coming into the card from the top right side.  We used small fish and beef icons on the card for guests to indicate their meal preference.  We also had one of the honeybees flying towards a hand-drawn jar of honey with dipper on the bottom right side.  Kelly and Wai gave away small jars of honey for their wedding favors, so Kelly wanted to incorporate bees and honey into their invitation and reply card designs as well!  I think they’re pretty adorable, myself.  The reply envelope featured their address on the front in aubergine ink as well as some more of the honeycomb pattern on the top left side.

Check out the additional photos below to see some of the more subtle details from these pieces!  I love the blind embossed honeycombs and all of the little details they had me incorporate, from the bees and small flowers in the border, to their lovely choices of type!  All of these little details really came together for a gorgeous set!

After I posted the above photos yesterday, Kelly e-mailed me with a couple more that you can see below.  After the invitations were well on their way, Kelly and Wai had me design a few more pieces for their wedding, which they had digitally printed and assembled themselves.  These were programs for the ceremony and a set of super-cute honey jar labels for their favors.  The program that you see below is a #10 size and was comprised of two pages that were printed.  The printed pages included elements from the invitation designs such as the bees, honeycomb pattern (this time printed in a light grey, since blind embossing can’t be done digitally) and the arbor.  Kelly cut and assembled these herself with a pretty vellum overlay and aubergine ribbon at the top.  Super cute!!

As I mentioned above, Kelly and Wai gave out little jars of honey for their wedding favors.  Kelly tied each tiny jar with a fabric top (I love the varying plaid and polka dot patterns she found for the different jars!).  They sent me all of the text and ingredients and I designed a small label that could printed on adhesive-backed paper so Kelly could stick them right on to the jars!  I think this was a totally cute way to personalize their favors and make them coordinate with the rest of their paper goods!

Kelly and Wai were so much fun to work with and I’m sure that their wedding last Friday was a blast!  Congratulations and thanks so much again, Kelly & Wai! 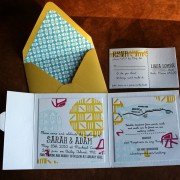 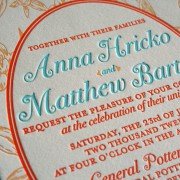 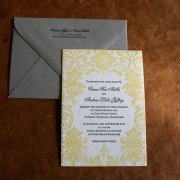 Wedding Programs & Coasters | Kara & Steve Save the Date | Lindsay & Shawn are Getting Married!
Scroll to top